The field of applicants was exceptionally strong and the successful candidates were, from left to right, with me, in the photo: Deputy Head Boy, Declan Johnson; Deputy Head Girl, Amy Jones; Head Girl, Caitlin Smits and Head Boy, Oliver Moss. 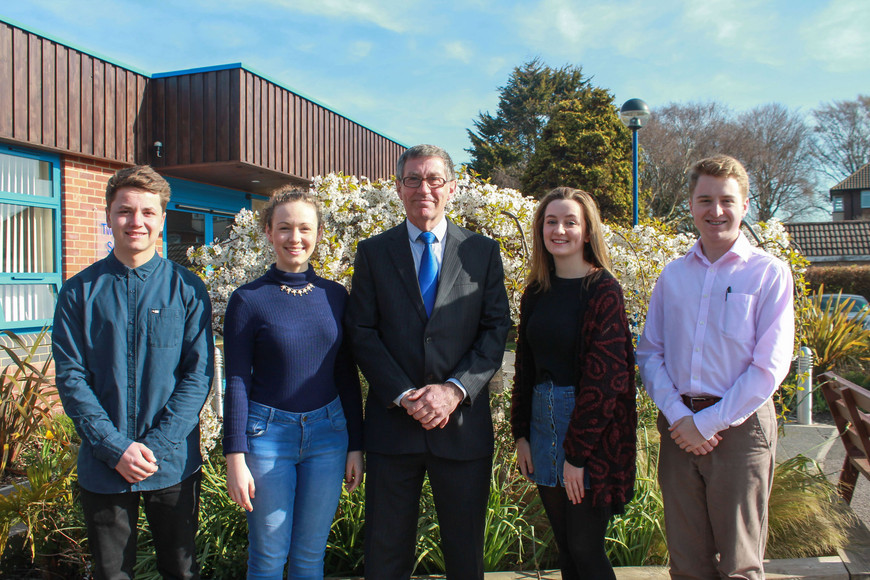 It was an very difficult decision to make due to the outstanding applications this year and Mr Cook, Ms Morris and I agonised over who should be successful. After much deliberation, these were the successful candidates.

Declan is taking physics, mathematics, economics and geography. He would like to go on to study economics at a London university and outside of his studies he is a keen surfer.

Amy is studying French, English Literature, Music and Philosophy & Ethics. Amy is hoping to study French together with another language ab initio at university. Her interests include music where she is a very accomplished singer, pianist and flautist.

Caitlin is taking mathematics, further mathematics, geography and history, and is planning to study mathematics at Oxford, Cambridge, Warwick, or Southampton. Caitlin also tutors 5 to 15 year olds for English and mathematics and was a member of the 6th Form netball team which were league champions this year, beating teams with much older players at Bournemouth University and Bournemouth Arts University.

Oliver is taking Physics, Maths, Politics and Spanish and hopes to go on to either study mathematics at university or go through commercial pilot training.

We feel very fortunate that we have such capable and able students within the Sixth Form and I’d like to thank all those who put their names forward. We very much look forward to working with Caitlin, Oliver, Amy and Declan over the coming year.

*
Cookie Notice: We use cookies on this site to improve your user experience.
Accept Find out more